USA vs. Canada (or Home vs. Away) Super Chexx. Notice the Canadian team is red and white.
The wrong side decal is installed on this 1994 version (it should be a white strip decal). 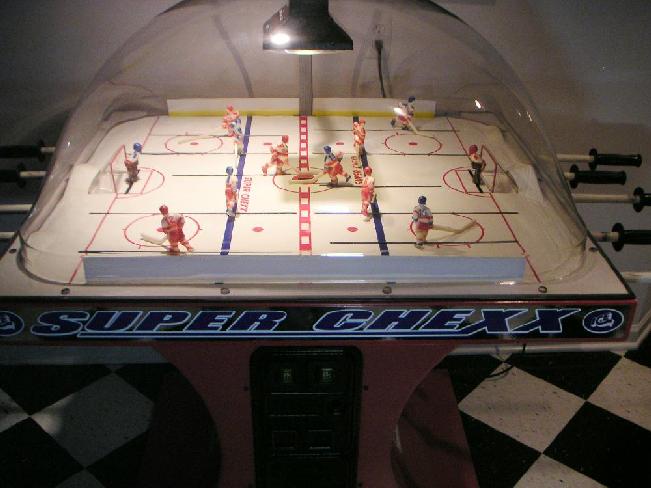 The original USA vs. Russia blue Chexx game (with a newer Super Chexx playfield).
The Russian team is pure red. 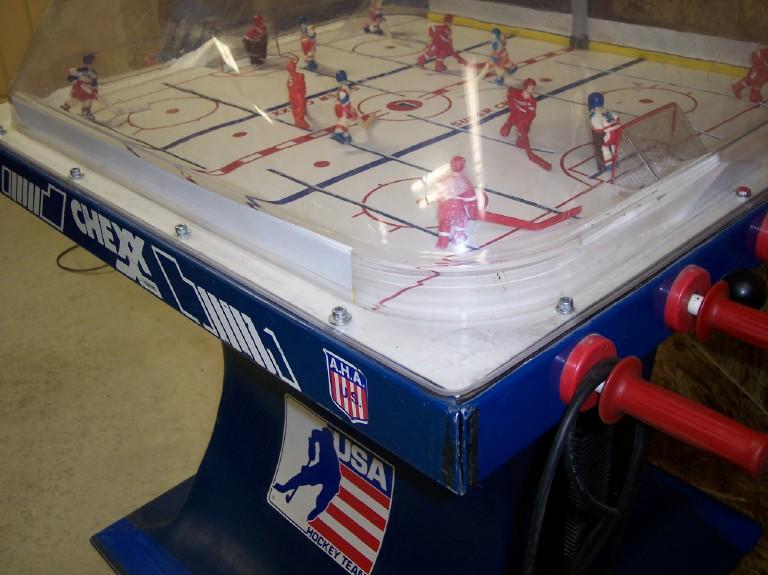 In Canada the 1983 style (long Moog CPU board) Chexx game was
marketed with a RED base and Canada vs. Russia. Also it plays the
Canadian national anthem. 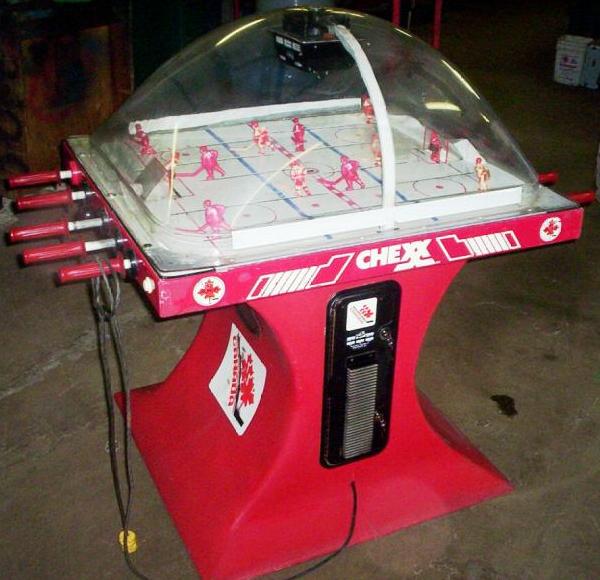 The 2001 to present Super Chexx CPU board. No pictures available.

The 1993 to 2000 style Super Chexx CPU board. This board is from a
1994 Super Chexx (due to the 5093 date code on the transformer). Notice
the large transformer, which provides power to the board. The small
transformer is the scoreboard's florescent light ballast. 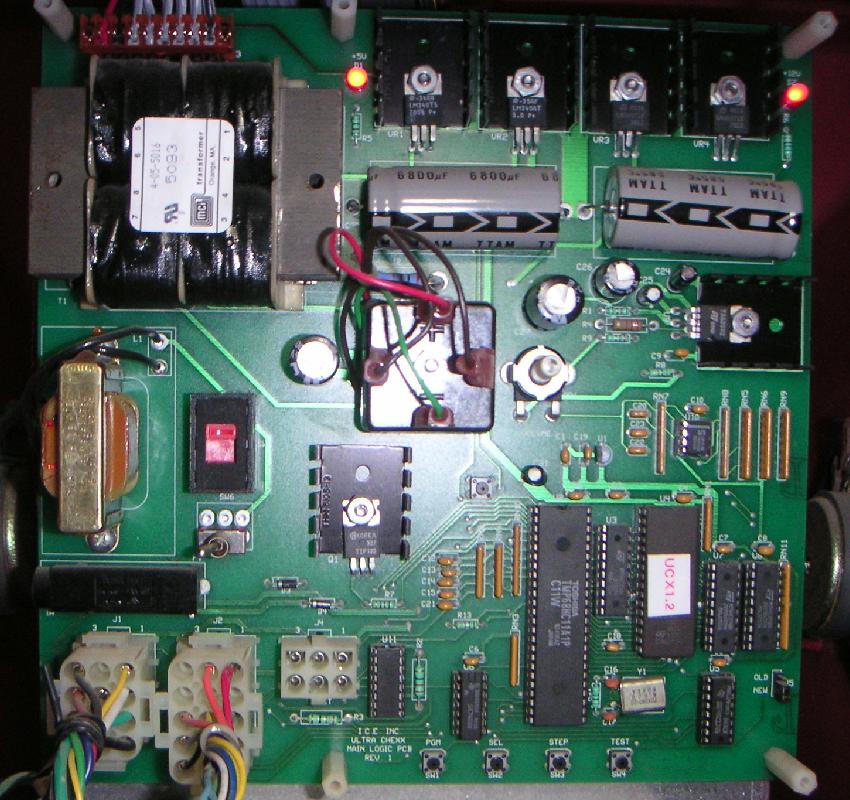 A 1988 to 1993 "small" Chexx CPU board using a 6502, 6522, 6116 RAM and 2732 EPROM.
Note the ballast transformer for the florescent scoreboard, different power supply
section, no ticket dispensor connector, and the 6502 processor (pre-68HC11).
The "CAN" on the one ROM indicating this is a Canadian Chexx that plays the Canadian
national anthem. Notice the 4 position DIP switch and volume at the right. 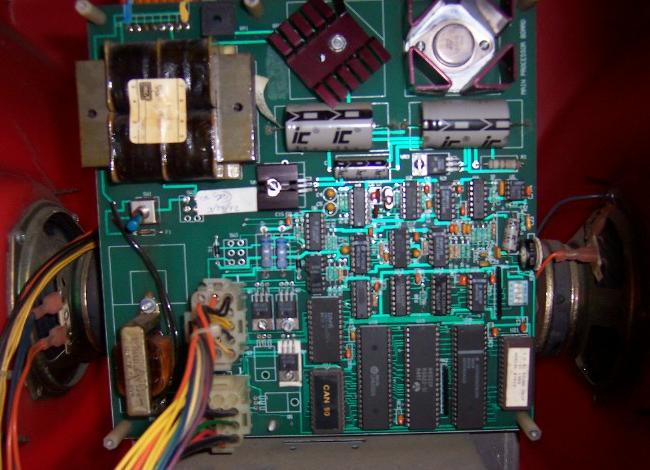 The score printed circuit boards. The top board has a single 74LS164 and three TIP120 transistor
which control the six 12 volt "ICE" lamps (two lamps per TIP120). The othre two PCCs control the home and
away scores. Two 74LS47 chips and one 74LS164 chip controls each score LED (the three chips closest to
any LED are the controlling logic). This is from a 1983 Chexx (no 'shots on goal'). 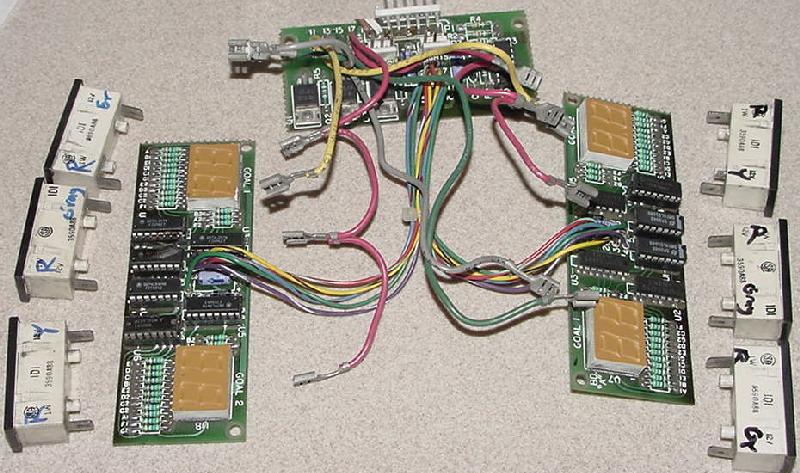 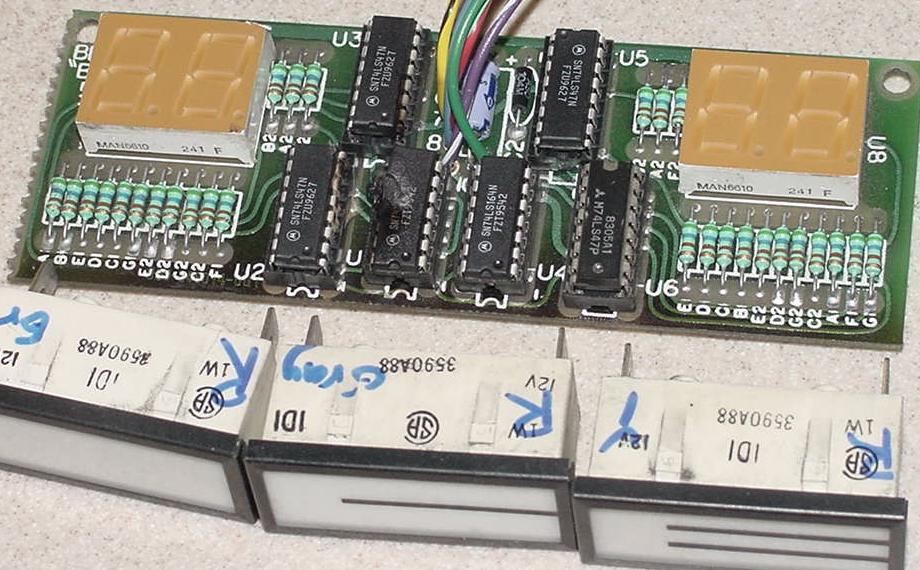 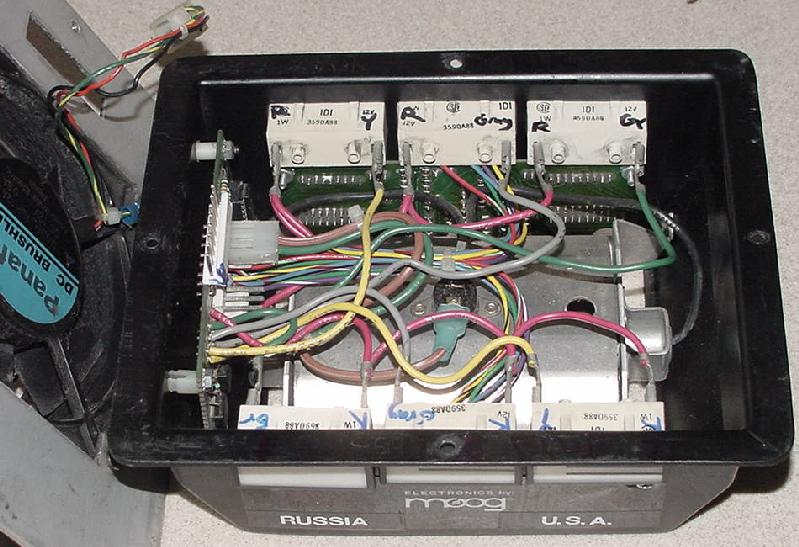 The scoreboard PCBs from the 1993 and later Chexx hockey games.
Note just two chips, a 74HC14 and a Maxim MAX7219CNG. 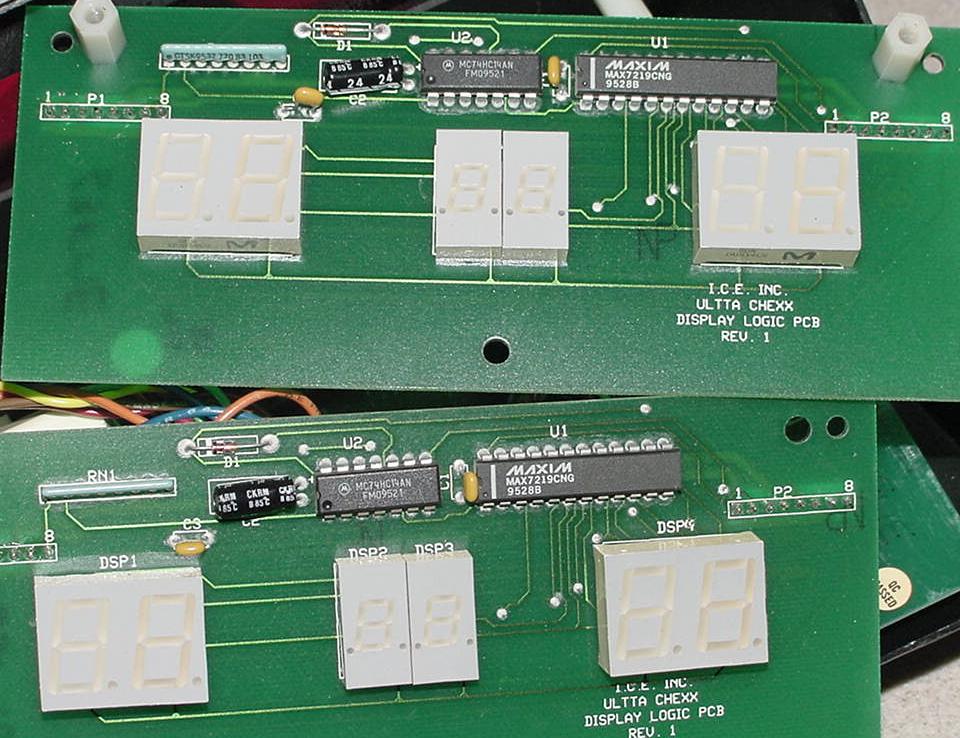 The scoreboard uses four of the circuit boards. They are the same board,
just daisy-chained together. The two boards used for shots on goal only use
one of the two connectors on the board, since they are the last link in
the daisy chain. 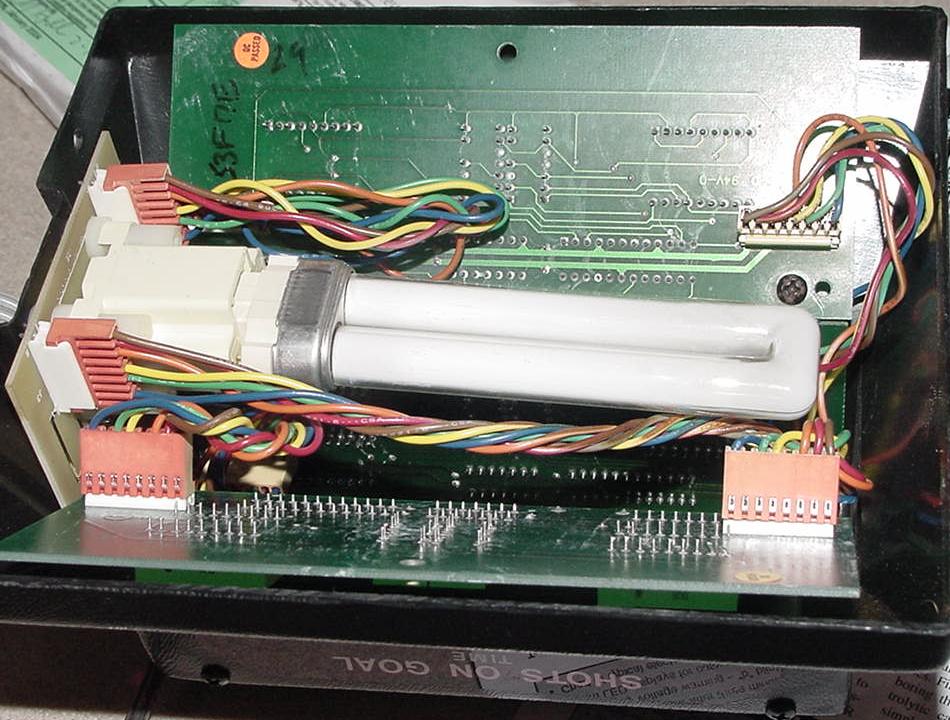 Booting a 1993 and later Chexx CPU board on the work bench. Notice the power cord and
speaker plugged into the "base" Molex connector on the left. 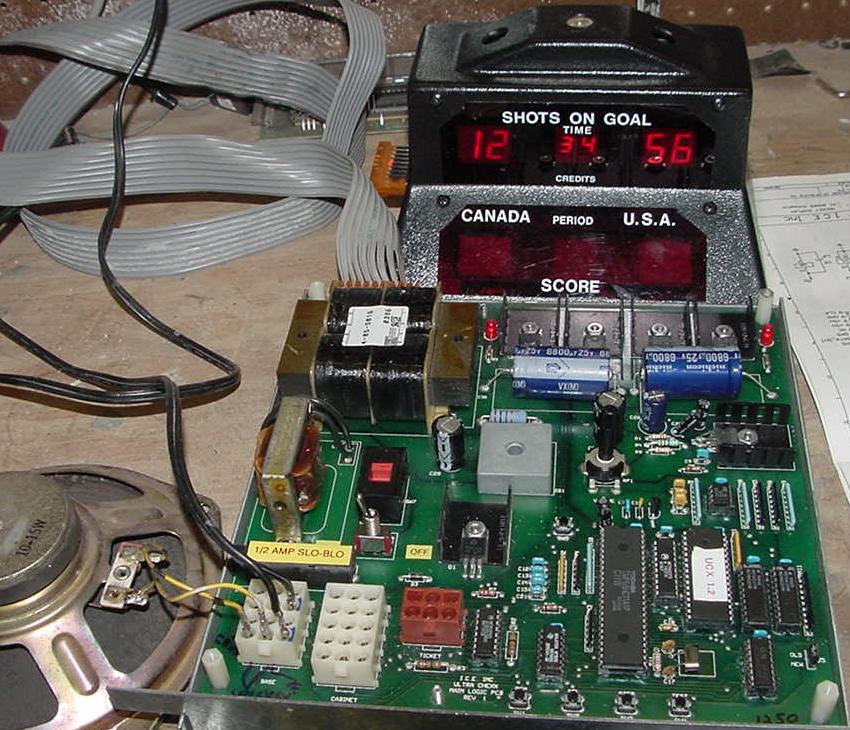 A close up of the "base" Molex connector being used to power the CPU board on the work bench
(black wires are 120 volts, yellow wires are speakers). 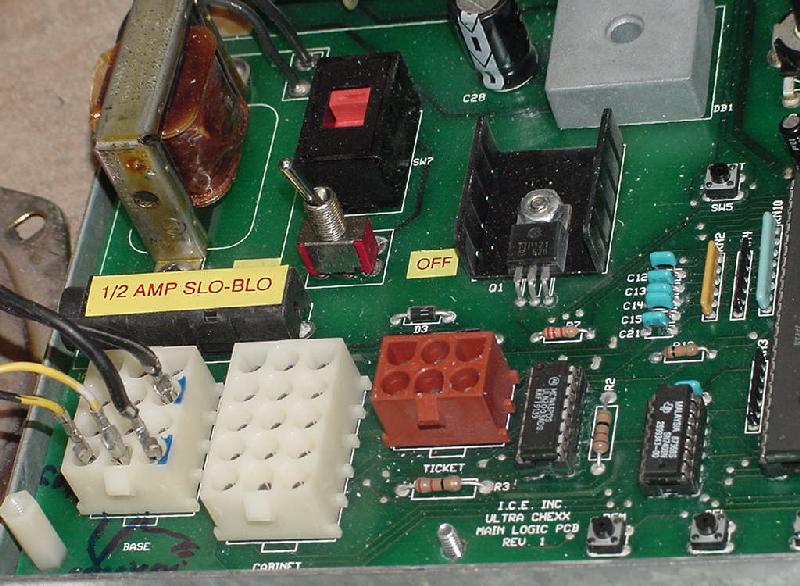 The displays on a 1993 Chexx score board at boot-up. This display will move
to the "goals" score row in just a second. 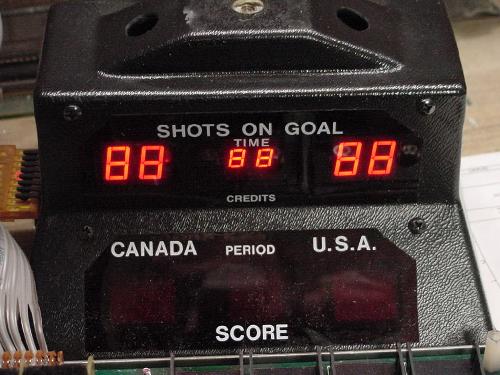 The displays on a 1993 Chexx score board in attract mode. 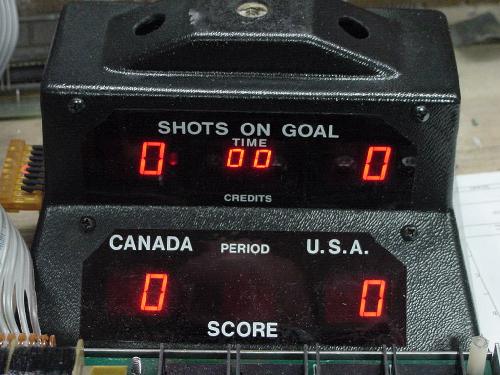 The base of a mid-1990s Super Chexx machine with the playfield removed.
Note the lack of anything other than a coin box, the CPU board and speakers. 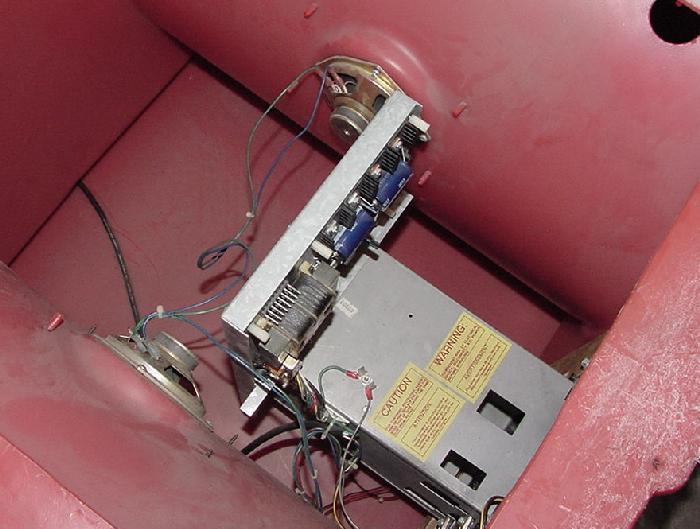 The base of an original 1983 Chexx machine with the playfield removed.
Note the power supply (bottom center), which is missing from 1993 and later red Super Chexx games. 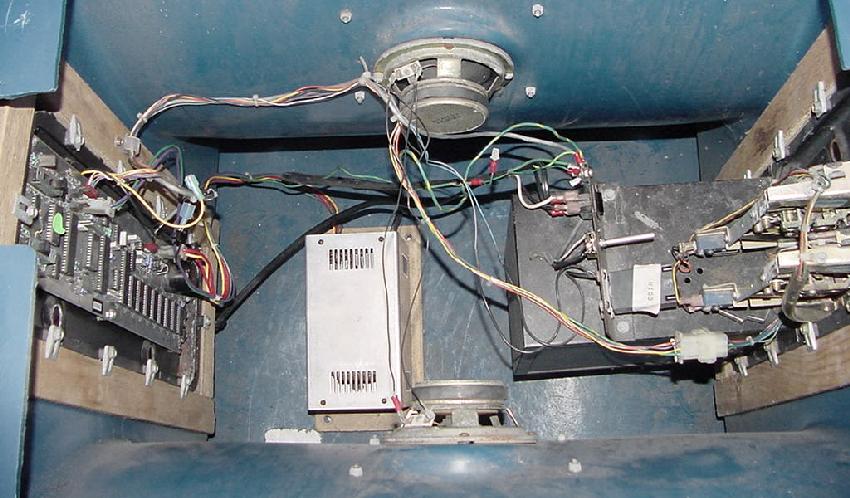 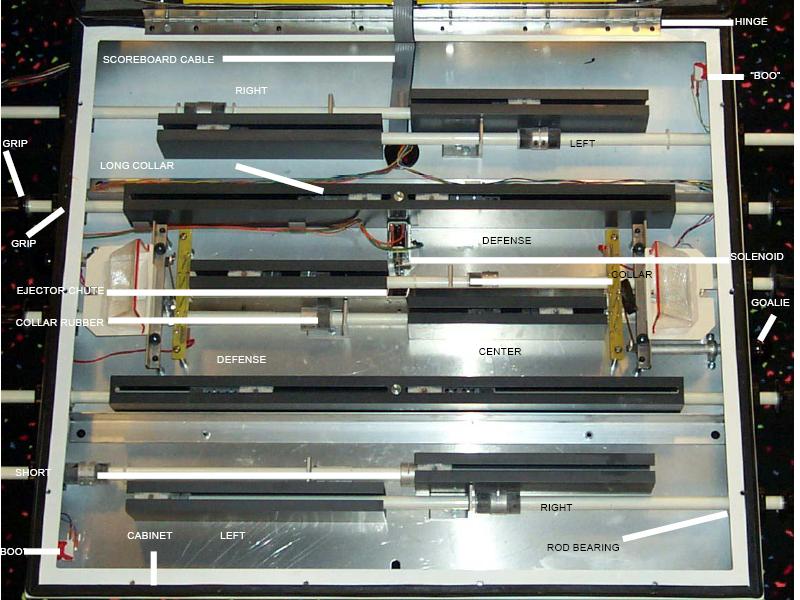 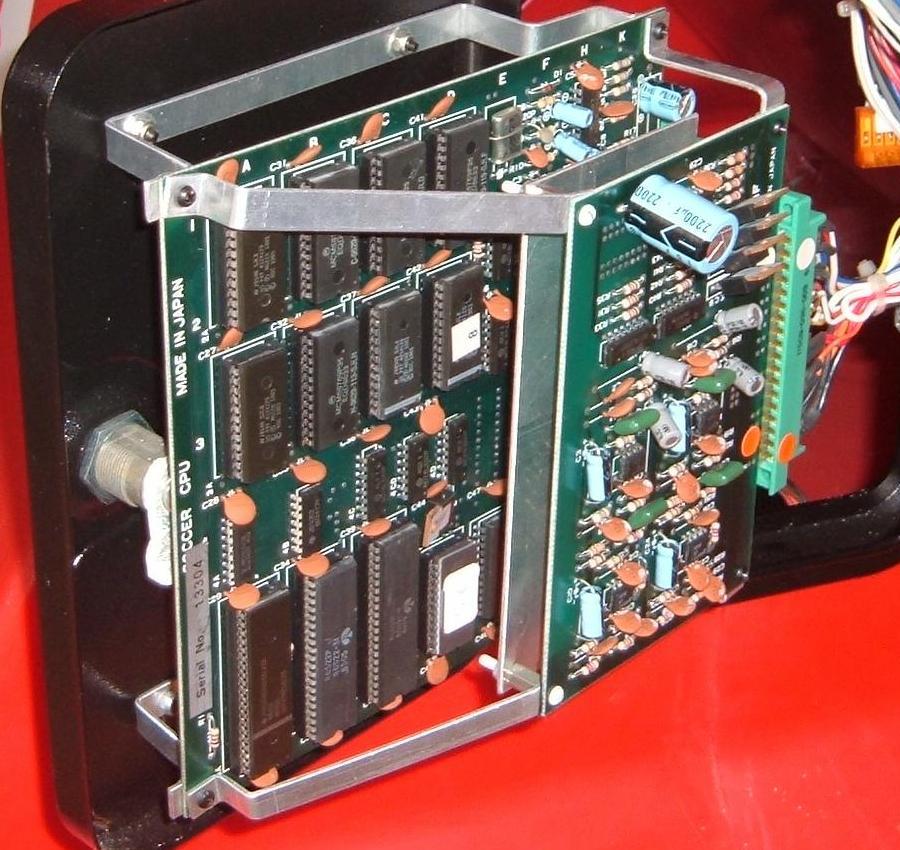 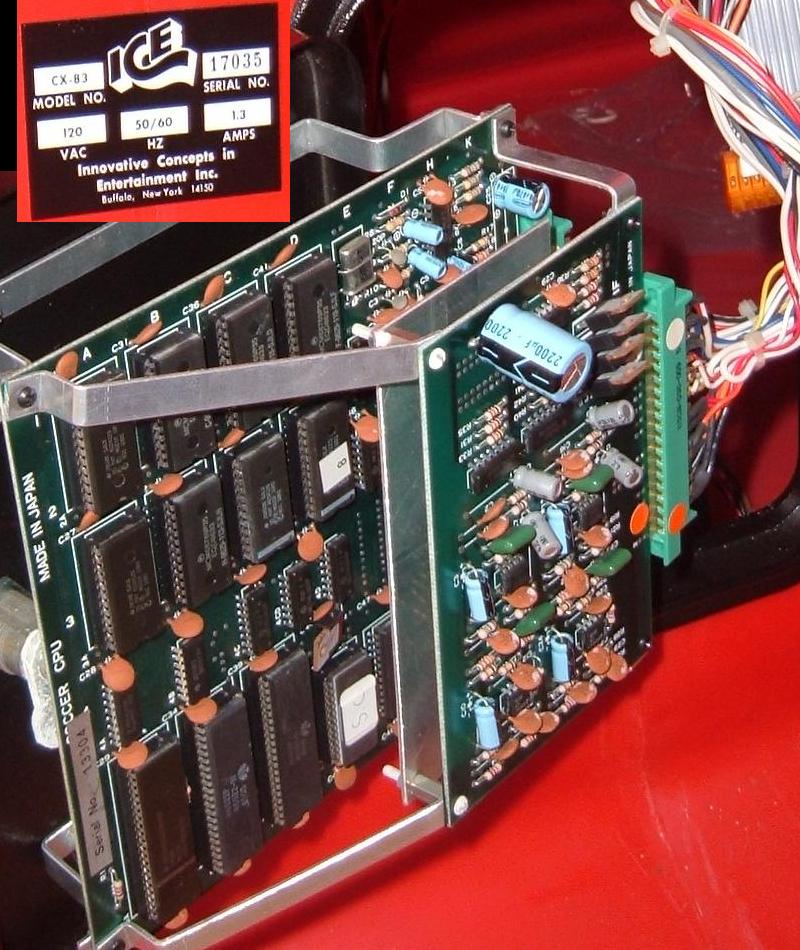 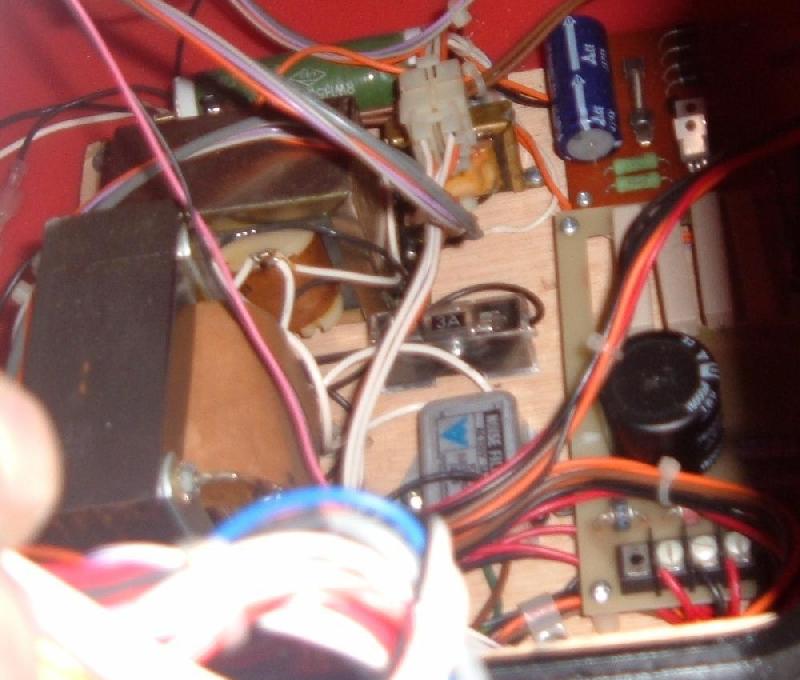 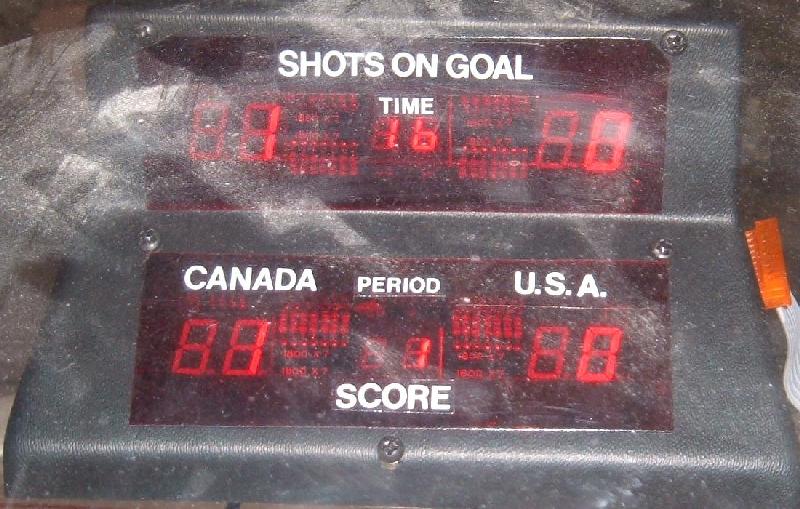 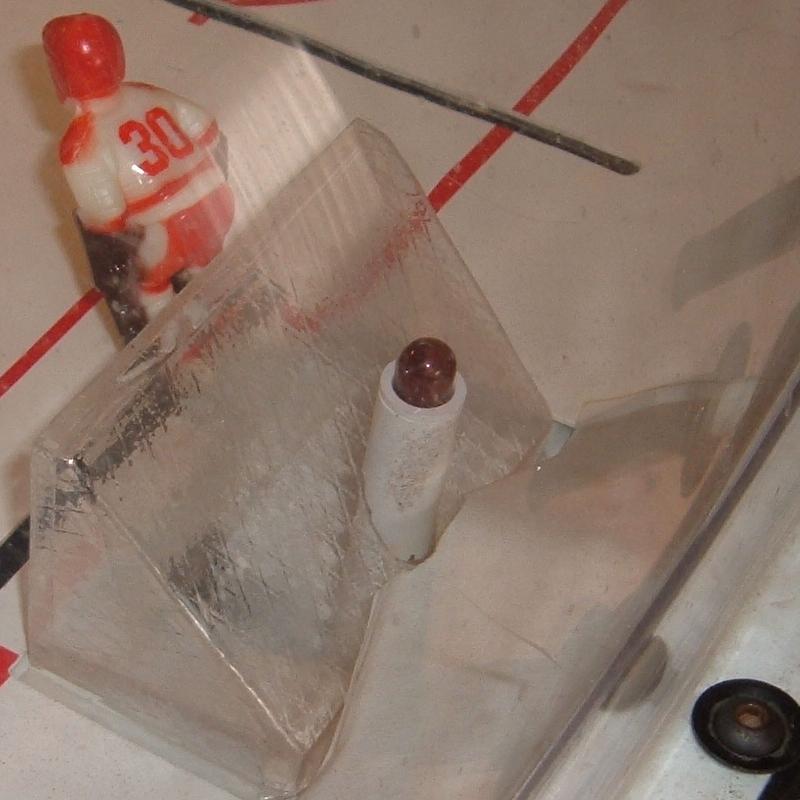 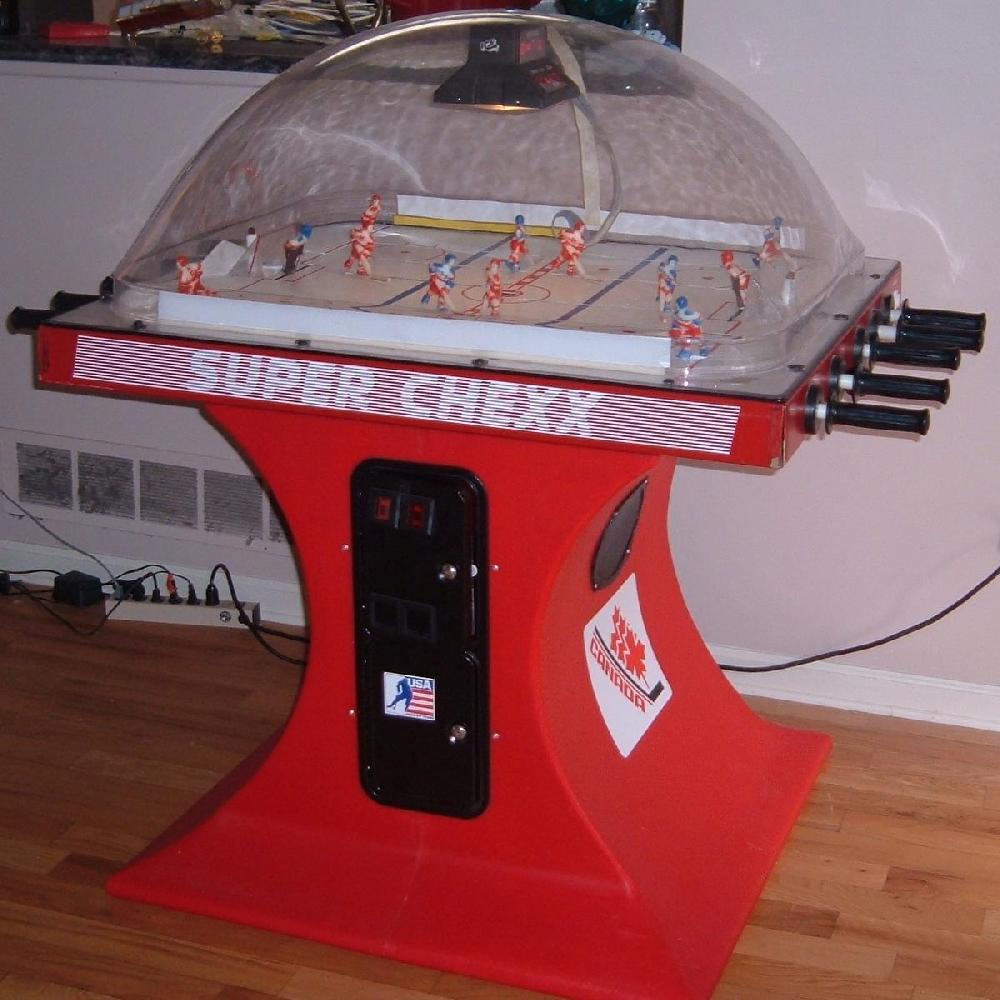 Upgrading a 1993-2001 Chexx CPU board for Better Sound.
If you can get a hold of the EPROM daughter board, it can be plugged into an older 1993-2001 CPU board. This will give much better sound. Below is what I *think* must be done to accomodate this.